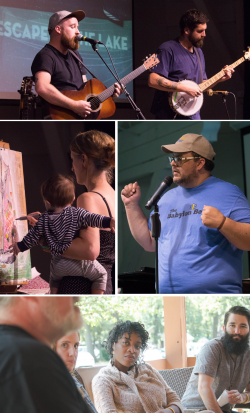 Escape To The Lake is my favorite week of the year, and because of the beauty of this amazing community, it is one of the best representations of the Church of Christ that I have ever encountered.  I usually hobble into the event weary, and leave feeling refreshed and restored. This year was no different.

The festivities began on August 2, when our Songwriters' Bootcamp began. A couple-few dozen folks came a day early to ETTL to get some coaching from our A-list songwriting mentors, which this year was Sarah Hart, Jimmy Abegg, Tim Coons, Andy Gullahorn, Jill Phillips, Son of Laughter, Joy Ike, and Nick Flora. These 8 coaches performed an outdoor "Epic In-The-Round Concert" to cap off that first night.

The morning of August 3 had the final sessions for our Bootcamp, and the rest of the campers arrived on site for the main ETTL program.  Our opening program included the world-premier of UTR Media's re-launch video and a duet by Nick Flora and Kermit The Frog! An amazing amount of talent rolled over the main stage that night for our evening concert, including Andy Gullahorn, Jill Phillips, Son of Laughter, forBrothers, Mr. & Mrs. Something, Alison Brook, The Asking, and Joy Ike. It was nice to be indoors as it rained most of the night. The night owls stayed up and enjoyed a songwriter circle up until nearly 1AM.

The first long day of ETTL was August 4, and included morning devotions with Roy Salmond and The Asking, a keynote address by Sarah Hart, our Artist On The Rise Showcase, a children's concert with Walt & Amy, and an array of breakout session options - like podcast recordings, discussions, an art workshop, and unplugged performances. The main stage concert that evening hosted sets by Andrew Greer, Jimmy Abegg, and Sarah Hart, plus a 2-hour all-star tribute concert to the late, great Rich Mullins. The latenight crowd enjoyed some s'mores at the campfire and a Nick Flora DJ'ed dance party. 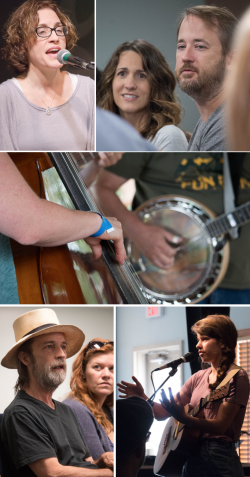 August 5 was another long day, which began with some outdoor devotions with Dave Bunker and Zak Tibstra. The rest of the daytime hours included a keynote address by Jimmy Abegg, a music game show, a Root Beer 'N Hymns singalong, kayaking on the lake, our second Open Mic session, and a handful of engaging breakout sessions. The final main stage concert was packed with amazing talent, including sets by Nick Flora, The Mosleys, Giants & Pilgrims, Taylor Leonhardt, Jess Ray, and Branches.  And many folks enjoyed more latenight campfire time and a songwriter circle up.

The final morning of ETTL on August 6 was like a sweet benediction to this week.  The morning began with a time of worship and communion led by Jess Ray, Taylor Leonhardt, and Tim Coons. We snapped a group photo, had a closing session where folks shared what the event meant to them, and soaked in a final in-the-round with a half-dozen artists.

What were my personal highlights? There are too many to list, but I think there are a few that will stick in my head and heart for years to come.  (1) Jimmy Abegg added so much warmth and knowledge to the event. It was a big risk for him, and he was quite vulnerable, which only made the rest of us braver. Believe it or not, his main stage performance at ETTL 2017 was the first solo set he played in 23 years!  (2) The Rich Mullins Tribute was a dream come true for me personally, and I was so thrilled how it turned out. A lot of discussions and planning went into that part of the night, and I'm honored we could pay tribute in our unique way. One attendee told me that night, "I had heard the name Rich Mullins, but I knew nothing about him, and now I feel like I know him so much more."  (3) Giants & Pilgims main stage set was one for the ages. Tim singing passionately. Betony painting simultaneously. Baby Arlo sitting on stage for the whole thing.  (4) Branches had a true butt-kicking set that I loved from start to finish.

It's easy for me to wax eloquent on the joys and highs of this event. But here are a few other voices that shared some meaningful comments.

* "ETTL has been a real surprising discovery. The whole week has just been an unfolding of love and compassion and vulnerability. The maker in all of us needs to be here to feel welcome and be a part of God's Kingdom. This time is a great balm of restorative experience!" - Jimmy Abegg [artist from TN]

* "It was a joy to be there and I connected with many artists and had good substantive conversations with them about their work, art and the way faith interacts with the latter." - Roy Salmond [speaker from BC]

* "It was a wonderful experience--I loved every minute of it. I loved the welcoming and encouraging environment for young and amateur songwriters and that everyone who wanted to got a chance to share." - Kristen Kopp [attendee from MN]

* "Escape To The Lake was amazing! The comfort and warmth of the people there was incredible." - The Mosleys [artist from FL]

* "It was a very refreshing and relaxed time. I came away very encouraged as a musician and writer and i loved being able to interact with the artists. I will be back!" - Corey Steiner [attendee from SC]

* "Escape To The Lake was wonderful! The event was relaxing, endearing, & lifting." - Sarah Hart [artist from TN]

* "The experience just felt healthy: the way we so evidently honored each other, and invited celebration and constructive criticism. So many folks said stuff that I'm always thinking but never hearing other people say, and that alone was liberating. I really enjoyed every session!" - Emily Hines [attendee from OH]