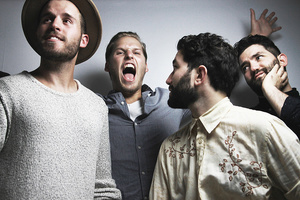 In the northeast, their talent has been turning a lot of heads. We are excited the New Jersey-based band forBrothers will be making the trek to peform live at Escape To The Lake 2017 this August. They also released a new project called Fool {live and acoustic} which captures some of the energy of their live performances and showcases why the whole nation should know this band.  To help, we interviewed their lead singer and principal songwriter, Shaant Shishmanian.

UTR: How did forBrothers originally form as a band?
Shaant:  Ben and I grew up playing music together.  We formed several bands until college when we went our separate ways.  In 2014 Carli Lampley, nee Marino (Ben and Cole's sister) asked me to play one of my songs, High Hills, at her wedding.  I gladly fulfilled her wishes and collaborated with Ben, Cole, and Aram.  Late into the night after the wedding I get a call from Ben and he says "dude..." and I'm like "dude...I know".  That's when we decided to form a group and forBrothers was born.

UTR: What do you hope listeners take away from your live or recorded music?
Shaant:  I write music because I feel like I can't express myself in conversation but I have so much going on in my heart and just want to be able to relate and sympathize with others.  I hope

the listeners know that they aren't alone in their thoughts and are encouraged that there are others who also struggle and don't have life figured out.

UTR: We are now 2 years after releasing your debut album Fool. Why was now the right time to do a live/acoustic release? 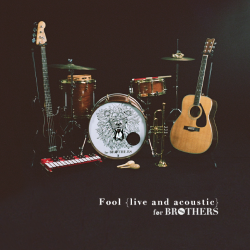 Shaant:  It's funny because we promised some of our crowdfunding supporters an acoustic album so we've had this project looming over us for a while.  We decided to make a fun project of it so we invited fans to join in a live studio recording and recorded both a Live AND Acoustic album in one night.

UTR: What was one of the most memorable moments in the making of the new album?
Shaant:  At the end of our first take of the first song we recorded, Fall On Me, the audience didn't know whether or not to clap so they waited for like 30 seconds.  We decided to keep it in the album because it captured the reality of the situation and life in general; there will be times of stillness.  You'll hear the silence in the audio from the CD or digital download (not the video).

UTR: Though you are making faith-inspired music, why do you hope your music reaches beyond the church walls?
Shaant:  Each band member has his own journey and it just so happens that we can all agree to rock out to the same message.  We want to hear people's stories and appreciate when others want to hear ours.

UTR: Besides music, over what things do the band members bond?
Shaant:  Diners, Coffee, Quality Furniture, and FOOD

UTR is thrilled to present the world premiere of THREE new videos produced in the Fool {live and acoustic} session - the first one "Fall On Me" is below. Check out more info on the band forBrothers.

forBrothers is a great band. Their live performances are outstanding!