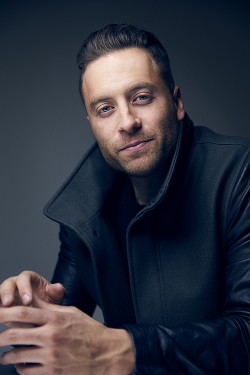 Not too long ago, UTR Correspondent Joel Mendez was able to sit down for a 1-on-1 interview with singer-songwriter (and recent reality TV celebrity) Brady Toops.  Here's their conversation about music, the road, and plans for the future.

UTR:  What do you enjoy most of touring?
BT:  Besides the hangs in the buses with fellow artists, I think I just love meeting new people. I love connecting with a new crowd. I love the random conversation that you find yourself in after a show - sometimes they are really awkward and sometimes they are beautiful. Sometimes people will tell you a really heartfelt story about how your music has meant so much to them. I am not sure there are a lot of jobs that have those sort of moments.

UTR: How do you define your style in regards to worship?
BT:  Actually, I don't even call my music "worship music." I draw inspiration from some of the old spirituals.  So if anyone is going to call my music something, it will have some element of the spirituals.  There is something about those songs that were written by people that usually had intense experiences of pain and trials, and out of this found this deep hope.  That's a unique combination. I think it is something I try to capture in my songs.

UTR: What are the challenge of writing honest music?
BT: For me, it has never been a real challenge.  I have been able to stay independent for the last 7-8 years since I have been doing music.  When you don't have as many voices speaking into what a record needs to be - like a PR or booking agent saying we need a radio song or whatever.  Since I don't have a lot those voices speaking to what I am doing, I get to make music I want to make. I won't put a song on a record unless I feel it. I feel if I don't feel it, then I am not sure anyone in the room is going to feel it.

UTR: How does the spiritual style work when you’re touring in a club environment?
BT:  On this tour I am trying some new songs.  I am actually in the midst in making a new record.  It will be my first record in the mainstream world.  My next record won't necessarily be a Christian record.  But as far as the spirituals work in this environment, there is something very universal about those songs and when people hear them, I find they respond quite well. They have said things like there is something deeply authentic and sometimes spiritual about your music. I think if people feel that, it can awaken something in their heart they are familiar with. I love creating moments for people, even if they don't considering themselves a Christian.

UTR:  What can you tell us about the new album you are working on?
BT:  We started recording it a few months ago.  I got ten to twelve new songs. I had some interesting experiences in the last year, from touring internationally for the first time to trying out reality TV, to have some name recognition & exposure beyond what I have known up to this point. And all those experiences inspired me to write these songs.  This will be a record of heartbreak and love and love lost.  What songs are always about.  Here is what I am hoping the record will be - Johnny Cash meets Boyz II Men meets modern beats.  I am not sure anyone has done that before, but that is the overarching goal.