We are excited to have a long-time listener of UTR, Luke Hyder, share the story about the making of his new EP coming out this Fall. 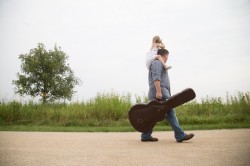 A pilgrim is someone who embarks on a journey with spiritual purpose. This can involve traveling to sacred sites, or revisiting places of personal significance. Pilgrimages can also be voyages that are more figurative, meditative, or creative in nature. As a full-time pastor and a Do-It-Yourself singer-songwriter, the last two years for me have been filled with pilgrimages of all types, each one contributing to the process of releasing my new EP, Pilgrim Miles.

In the Summer of 2013, in my seventh year of serving First Presbyterian Church of Libertyville, IL as their Associate Pastor for Worship & Evangelism, I was blessed to take a 3-month grant-funded sabbatical. My family and I traveled to places of spiritual home out West, where my wife and I both grew up, and we made pilgrimages to historic Christian sites in Scotland and Northern Ireland.

All along the way, one of my primary goals was to engage in a more regular discipline of songwriting. I’ve been writing songs since I was in high school and college, but in the years since being called to full-time ministry, my songwriting, performing and recording had taken a backseat. Even in a pastoral position where I regularly lead worship and write music for the church, there were still aspects of my identity as an artist that I felt had been neglected. So during my sabbatical, I intentionally embarked on a parallel creative pilgrimage, journaling my experiences through songwriting. 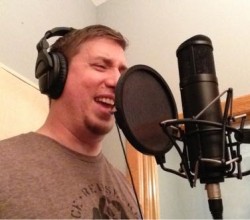 When that amazing Summer came to a close, I had a half-dozen or so finished songs that I was really proud of, as well as a number of song fragment filling the pages of a small notebook. I began almost immediately to dream about recording the songs. Over the next two years I performed them in worship services and at retreats, in coffee shops, backyard concerts, and even at open mic sessions at Escape to the Lake, and the positive responses by those who heard them were encouraging and inspiring.

So I resolved to push forward and record these songs. From the beginning, I knew I wanted to have another person produce the project. I had done two self-produced recordings before, and this time I wanted to see what another person’s creative input could bring to the final product. The first person I reached out to was my friend Chris Meyers. Chris and his wife Hannah (a good friend of my wife’s and mine from college) live in Nashville, and on top of their day jobs they record and perform as the amazing Americana band, The Bittersweets. I love their sound and the artistry of their songs, and I knew Chris also did producing on the side, so I asked if he might be up for producing an EP for me, and he said yes! I sent Chris rough demo versions of the five or six songs I wanted to record, and he suggested instrumentation and arrangement ideas. We went back and forth on email for a couple months until we arrived at a plan for a three-day recording session. 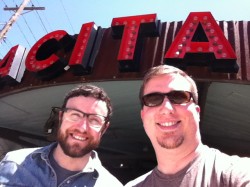 So in May of 2015, I flew to Nashville and spent three days working with Chris in a home-studio one block off Music Row. It was an awesome week, making music 9-to-5, eating meals at nearby restaurants, and staying within walking distance of the studio. Our plan of attack was simple, based around the instruments that Chris and I could play. The first day we recorded the main vocals, acoustic guitars, and piano tracks. On day two we added bass and percussion, with a combination of live elements played by Chris and myself, and electronic elements played on a keyboard. Then on the third day we added other layers: electric guitars, mandolin, background vocals. Chris’s wife Hannah even came in and added gorgeous harmonies that gave me goose bumps. Each evening we would debrief what we had just recorded and discuss our plans for the next day over delicious tacos at Taco Mamacita. By the end of the three days we had a solid core of five songs, and I returned home to Chicago on a high from such a creatively fulfilling week. 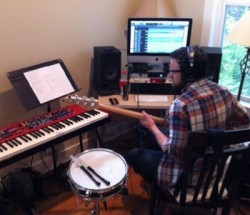 The next steps were for Chris to begin the process of mixing what we had recorded, and for me to figure out how I was going to fund the completion of the project. Chris’s work as producer had been paid for, but my expenses traveling to Nashville, as well as all the remaining costs associated with getting a CD released (mastering, photography, packaging design, disc manufacturing, digital distribution, etc.) were too high to come out of pocket, especially for a family living on a pastor’s salary. So I decided to include my community of friends and family, and network of fellow music appreciator and creators, in the process of completing this project, and I launched a crowd-funding campaign through Indiegogo.com.

I had never done anything like this before. I sought the advice of other independent artists, especially those I had gotten to know through Escape to the Lake over the last three Summers, and many of them offered great suggestions for how to make the campaign a success. Dave Trout even helped me come up with the best plan for how to set the pledging levels and what perks to offer! We had a relatively modest goal of $2500, so I wasn’t afraid we wouldn’t make it, but the generosity of friends, family, and acquaintances all over the country blew us away. We surpassed our goal in just over 24 hours, and by the end of the campaign we had raised about $3600, even after Indiegogo’s 4% and credit card fees were taken out. With the extra funds we were able to add a couple of our stretch goals: beefing up the CD packaging from simple two-sided sleeves to multi-panel wallets; and recording an additional song in a local Chicago-area studio to add as a bonus track to the project. It has been so exciting and so freeing to go into the final stages of this project dreaming about what can be done and not worrying about how it’s going to be paid for.

As of right now, we’re nearing the end of a journey that started over two years ago. Chris and I have been sending mixes and notes back and forth all Summer, and the final mixes are almost ready to send to the mastering studio. I’ve been working with another good friend, Vanessa Griffin, a fantastic local freelance photographer and designer, on the packaging for the physical CDs. Our hope is that soon we will be able to upload the project to CDBaby.com, and set a release date for Pilgrim Miles sometime in October, with a digital pre-release coming to supporters inboxes even sooner. And while one creative pilgrimage comes to a close, a new one will begin, as we see what becomes of this project once it is released into the world, and as I discover the kind of husband/father/pastor/DIY recording artist/independent singer-songwriter that God is calling me to be in this next season. I’m looking forward to the journey!