Where were you in October 1994?  The OJ Simpson trial was in full swing.  The MLB Playoffs and World Series were cancelled.  The NHL was on strike.  The Rolling Stones were on the Voodoo Lounge tour.  ER had only been on the air for one month, and Pulp Fiction was the biggest movie at the box office. 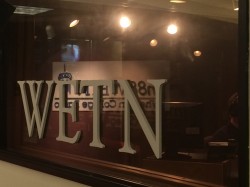 It was also 20 years ago this month that Under The Radar producer and host Dave Trout began his career in broadcasting.  His launching pad was WETN-FM on the campus of Wheaton College.  "I still have a cassette tape of my first time going on the air," recalls Trout, "but it's worse than awful and no one is ever allowed to hear it. I put on this terrible rock-jock 'DJ voice' and I played past-its-prime Christian rock." 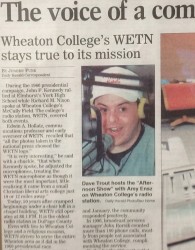 Even though the quality of the early days was questionable, the radio bug had bit Dave. Over the next four years, he dove headfirst into every opportunity afforded him to gain experience in radio operations, including Morning Show host, Afternoon Show host, Music Director, Production Assistant, writing newscasts, and as a live event representative.

"My experience at WETN was invaluable - a great learning experience and my favorite part of my whole time in college," said Trout.  "Maybe most important of all, it set a trajectory and a path that I still walk to this day."

Dave also worked as an on-air announcer and event representative for WCFL-FM from 1997-2001.  During that time he began his first full-time role as Network Representative at Moody Radio in Chicago.  This offered Dave experience in a different side of radio - customer relations, marketing, promotions, and publicity.  Dave also began a 7-year run as host of The Worship Spotlight - the Saturday Night music show on Moody Radio that was syndicated on over 200 radio outlets. 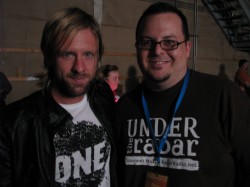 In November 2007, Dave was hired as the Marketing and Promotions Manager at ReFrame Media.  Less than 6 months later, Dave developed the format and concept for Under The Radar.  A couple of weeks shy of his one-year anniversary at ReFrame, UTR had officially launched and was on the air.  As the program's following started to grow, the management at ReFrame allowed Dave to invest more time and energy into UTR, while taking some of his earlier marketing responsibilities off of his plate.

"It has been an amazing journey," states Trout. "I am honored that I have worked my entire career for Christian media organizations. God has helped me grow professionally and personally, and each and every step has been important.  When radio is done well, it is all about people.  Without a doubt, the people I have met or worked with are what I cherish the most.  I have a dream job, and I am overflowing with gratitude."