It's been several years, but it was nice to return to my alma mater, even though it did make me feel old.  The gathering place is not designed for concerts, but it is the most historic concert venue in my personal life - Edman Chapel on the campus of Wheaton College.  In fall of 1986, I attended the first two concerts of my life in that building (Farrell & Farrell and White Heart). I saw some of Christian music's legends on that stage, like Petra, DeGarmo & Key, Michael W. Smith, Point of Grace, Mylon & Broken Heart, Sixpence None The Richer, PFR, Caedmon's Call, Newsboys, Chris Rice, and Andrew Peterson.  In this building, I also saw the first professional concert of 3 young dudes who called themselves DC Talk.  It was also in this building that I saw one of the final performances of the late Rich Mullins.

I was able to add one more memorable concert to this long list with the amazing performance doled out by Drew Holcomb & The Neighbors.  It was my first time seeing them perform, and based on second-hand accounts, my expectations were high.  But first we were treated to a nearly stealing-the-show set by opener Judah & The Lion.  This was my first time seeing them play as a full band.  Their energy and enthusiasm was off the charts, and the audience was quickly hooked into their live renditions of the high-octain songs from their brand new release Kids These Days.  They commanded the stage and participation from the audience like very few opening acts can.  We were singing the hooks, we were spontaneously dancing (which mandolin player Brian coyly mentioned was an approved kind of dancing at Wheaton College), and were spellbound by the fantastic performance.  Just for kicks, they even threw in an unexpected cover of "We Built This City On Rock & Roll." 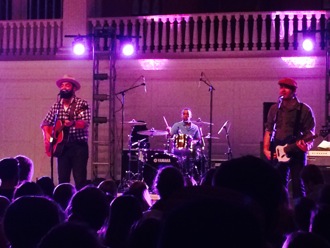 The crowd was definitely warmed up now.  Drew Holcomb and band took the stage and opened with their 2013 anthem "Good Light."  While it was clear that our headliner had mad skills, there was a brief moment where I wondered if they could keep up with the level of energy that J&TL dished out.  As the set went on, the energy intensified, and the songwriting prowess of Mr. Holcomb was on full display.  The average age of attendee was probably 20 or 21, but clearly the gritty music of The Neighbors has really connected with the younger generation.  On the song "Live Forever" it seemed like over half the crowd new every word of the song.  You could look around and see it on the faces in the crowd.  Drew's writing taps into something deep within us. 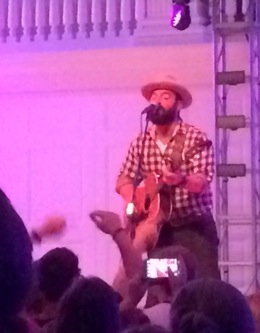 For me, the highlight of the concert came somewhere in the middle.  Drew excused his band, and he played the song "Mercy" completely unplugged, with no mic support.  It is not written as a worship song, but it was one of the most spiritually moving performances I have seen this year.  Other highlights include "Tennessee," "A Place To Lay My Head," "Fire and Dynamite," and they also debuted a couple of songs from their upcoming album, releasing in January 2015.

Prior to the concert, the friend who was with me asked me what to expect since they weren't familiar with Drew's songs.  My answer was, "It's music from the guts."  The live performance was also exactly that - passionate, honest, heartfelt, and raw emotion.  Do yourself a favor and see both of these bands the next time they come your way!