I have been a Ben Rector apologist for years.  My 3-yr-old daughter's favorite song is "Let The Good Times Roll."  And even though loving Ben is the cool thing to do right now, we have been featuring his music on UTR since 2009!  I've seen Ben perform a couple of times as an opener, but last weekend was my first time seeing him in his own headliner concert, and it delivered on every level.

Ben and company took over the Chicago House of Blues for back-to-back nights on the Brand New Tour. That's right... a singer-songwriter dude for 2 nights - the Friday show sold out, and I was at the Saturday show which was over 90% sold out! 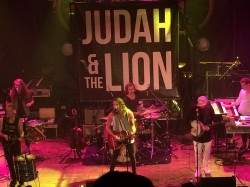 Joining Ben on tour as the opener is another UTR favorite, Judah & The Lion.  They brought tons of energy and enthusiasm to the stage as one of the best "openers" I've seen in years.  They mostly played songs off of their 2014 release Kids These Days, but weren't afraid to throw in some well-timed 80s/90s cover songs too.  They treated the crowd to a new song called "Take It All Back," and announced that they will have a new album out in the first half of 2016. Near the end of their set, they burst into "I'll Fly Away" - and I witnessed a crowd that was dialed in and singing along in a way that normally doesn't happen for an opener at a club show.  They ended with an energy-expending creciendo on their song "Water," simply WOW'ing the Chicago crowd.  They did their job.  They didn't steal the show away from Ben, but they primed the crowd for a bar-raising night.  It won't surprise me if Judah & The Lion are doing their own headlining shoes at the Chicago HOB in the next year or two. 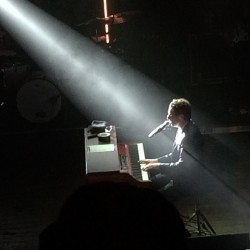 After a brief intermission, Ben Rector and band took the stage, and began with the pensive opening track "Make Something Beautiful" off of his August 2015 release Brand New.  That led right into the high-energy title track.  While much of the set (as you would expect) were from his new album, he fit in a lot of fan-favorites from his 6-album career, including "When A Heart Breaks," "When I'm With You," and "The Beat."  He closed out his main set with "Follow You" - the song that topped my list of the best gourmet songs of 2013. 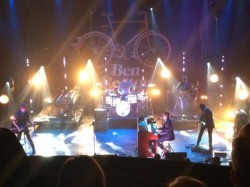 To me, there were only 2 missteps in the whole concert.  The first is that I was quite surprised that he didn't play his A+ cover of Whitney Houston's "I Wanna Dance With Someone" - which only appears on a live album from 2014, but his YouTube video of that song has over 1.6 million views.  The second is a bigger flaw, in my opinion.  Ben & band only played 1 song as an encore, and he chose "White Dress" - which is a lovely song - but didn't hold the audience's energy level at 10.  It's his second-most popular song from his 2010 album Into The Morning, but Ben's career has really ballooned in mainly the last 2-3 years, and so you could tell that the audience was really into the newer songs.  In my opinion, this one dipped a little bit too far into the back catalogue, and I watched the energy slowly escape the room.

Regardless of my minor critique, the concert was 2.5 hours of pure delight.  It's exciting to see Ben's music reach a wider and wider audience with each passing year.  If the Brand New Tour rolls through your town, put it on your not-to-miss list!